Since Christmas, I have been under the weather, fighting a series of recurring colds.  That is my excuse, and I’m sticking to it.

I had noticed the MyVegas Player Bar at the bottom of the MyVegas game screen… but never paid it too much attention.

Here is what I’m talking about:

It is the listing of Facebook friends, with the people who are playing MyVegas grouped together on the left side.

I had just used it as an easy way to share Bonus Chips with my Facebook friends who are also playing MyVegas, and never thought about it, beyond that.

This morning, I took the above screen capture, while my wife was playing, and I noticed that I was to the left of her picture.

I’d never paid attention before, but then suddenly realized… they were ranked by the MyVegas Game Level achieved.

Although it has NOTHING to do with how many Loyalty Points you’ve accumulated, (my wife is 20K LP’s ahead of Doug, although 3 Game Levels behind) it is still a point of contention, and I can well imagine being spurred on, as someone gets close to catching up on me.

Kudos to the MyVegas folks for constantly tweaking and making it an even more compelling game experience !!!

The MyVegas game is about to hit a major milestone… 100,000 daily players on Facebook. 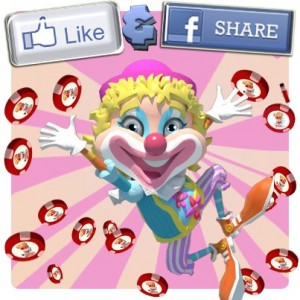 Everyone who is an active MyVegas player, gets one entry per player, per calendar day, between now and Sunday midnight (Vegas time)