When you begin playing MyVegas, the only game option is the Slot Machine game “Excalibur”.

You can go to the PAYS section in the game to see all the various combinations of winning combinations, but here are a few of the more fun elements of the game.

Having a MyVegas “V” symbol show up on the screen, starts you collecting the various architectural elements to build your own MyVegas virtual Las Vegas strip.

The first Hotel Resort you build is the Monte Carlo.

Once you have collected all the pieces, you get to go ahead and build your first Resort… which you can then visit, after certain time intervals, to collect free chips.

With the Monte Carlo Resort, every two hours you can go and collect 200 free chips.

On the MyVegas Strip, there is also a wedding chapel and a helicopter tour company, where you can collect 15 chips from each, and a car lot where you can get 60 free chips.  The times between collections varies, depending on the amount of chips… but as with the REAL Las Vegas, time seems to fly by.

Landing on the Free Spin Princess advances the Prince one spot up the tower on the left hand side of the game, towards his true love.

If there are two Battle Reels PLUS a Free Spin Princess, the lucky Prince gets to climb all the way to the top of the tower, where he is rewarded with a kiss.  The player is rewarded by eight free spins. 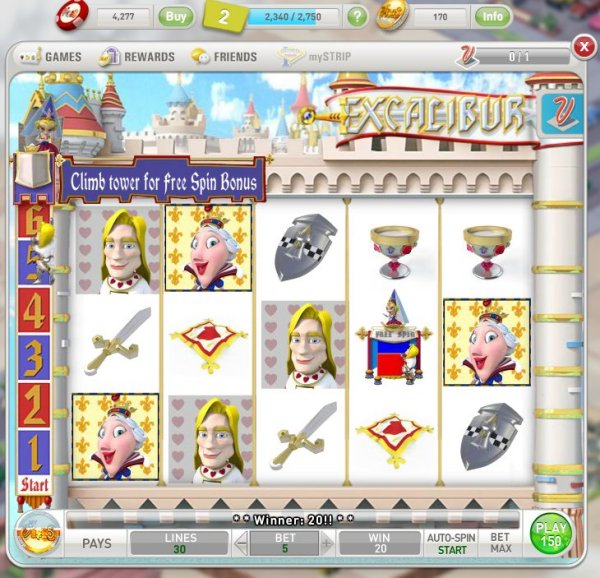 If three Battle Reel icons show up, then a screen opens up and you get to choose between the Prince of Hearts (our hero) and the dastardly and conniving Prince of Spades.  Depending on the outcome of the “duel” scene, (based purely on luck,) you either get bonus chips… or not.

It should be noted that all the scenes are played for fun, and no one is ever hurt in the cartoon scenes, other than the Prince does get knocked out by a mallet, wielded by a nasty cartoon cohort of the Prince of Spades. 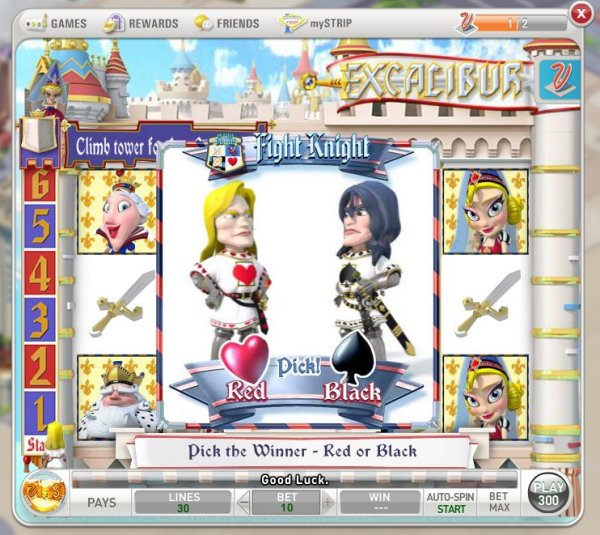 If two Battle Reel icons and a Heart Shiueld icon show up on the same screen, then it is Date Knight.

Again, a screen pops up, and you get to choose between flowers or a gift box to give to the Princess.

There are various outcomes, from a big pile of bonus chips, to an angry stare from an upset princess.